With the US still very much in the grips of the Covid-19 pandemic, which has killed more than 166,000 people in the country, you might assume that Donald Trump would be focussing his efforts on fighting the virus.

Think again. On Wednesday, the government proposed re-writing rules on showerheads following complaints from the president that current levels of water pressure  – which are set to save water – were hindering his attempts to make his hair “perfect”. (Yes, you read that right).

“You just stand there longer or you take a shower longer? Because my hair — I don’t know about you, but it has to be perfect. Perfect.”

The Energy Department has now proposed rolling back three-decade-old efficiency standards for showerheads.

The plan essentially seeks to change the federal definition of a showerhead to allow manufacturers to dramatically increase water use.

Under rules Congress passed in 1992 in response to severe droughts, water flow from an entire showerhead is limited to 2.5 gallons per minute. The proposed change would allow manufacturers to apply that restriction to each nozzle on a showerhead.

The proposal would reverse 2011 guidance from the Department of Energy that determined that when Congress used the term “showerhead,” it “actually meant ‘any showerhead’ ― and that a showerhead with multiple nozzles constitutes a single showerhead for purposes of [the] water conservation standard.”

Conservation advocates called the proposal a “gimmick in search of a problem” and likened the complaint to a 1996 “Seinfeld” episode about low-flow showerheads.

“The new multi-nozzle showerheads would not only needlessly waste water, exacerbating shortages caused by drought, but also boost the carbon pollution that has made long-term droughts worse,” Andrew deLaski, the executive director of the Appliance Standards Awareness Project, said in a blog post on Wednesday. “No one benefits from this gimmick.” 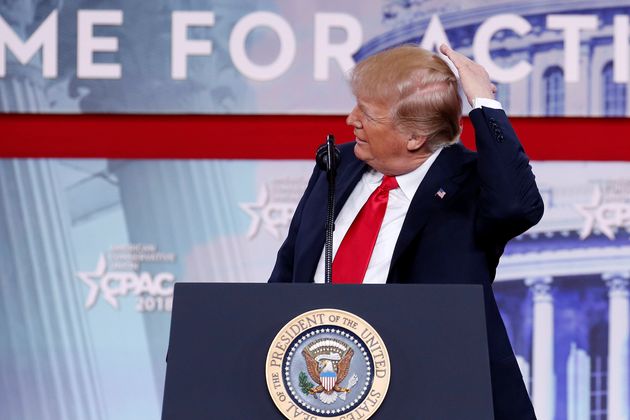 Increasing water use would add new stress to the environment and ratepayers at a moment when both are under severe and mounting pressure.

Three entire U.S. states ― Colorado, Nevada and New Mexico ― are in a drought, according to the U.S. Drought Monitor. In Puerto Rico, the largest U.S. overseas territory, the government implemented water rationing throughout 26% of the island as drought yet again caused severe reservoir shortages.

Americans’ water bills, meanwhile, increased by an average of 80% over the past decade.

Trump’s tirade on the state of showerheads is his latest complaint in a long line of gripes about household appliances.

“People are flushing toilets 10 times, 15 times, as opposed to once,” he said.

During a rally speech last year, he said: “I say, ‘Why do I always look so orange?’ You know why: because of the new light,”